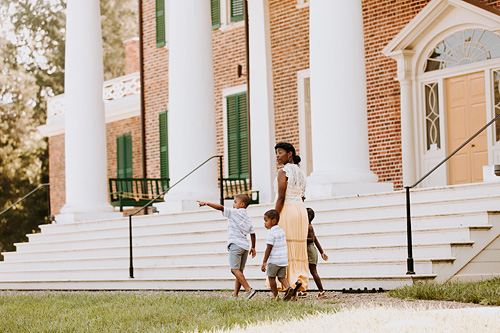 Orange County’s history dates back to the mid-eighteenth century when it was named after William IV, Prince of Orange. St. Thomas Episcopal Church, built in 1833-34 in the Town of Orange, is the sole remaining example of Thomas Jefferson’s ecclesiastical work and was also General Robert E. Lee’s place of worship during his encampment in Orange in the winter of 1863-64. Civil War brought transportation of troops and supplies for General Lee’s Confederate Army, as well as hard-fought battles on its soils where Generals Lee and Grant clashed for the first time in May 1864. This engagement resulted in 26,000 casualties and marked Grant’s first step toward Appomattox.

Orange County’s presidential lineage includes James Madison, fourth President of the United States and “Father of the Constitution,” who lived at Montpelier; and our twelfth president, Zachary Taylor, who was born in 1784 at Montebello, near Barboursville. Among these two homes, the National Register of Historic Places (NRHP) has recorded 32 other historic landmarks throughout the county.

Further information about the county’s history may be obtained from these resources:

Sign up for the Think Orange newsletter and get the first scoop on company expansions, new commercial real estate listings and more.